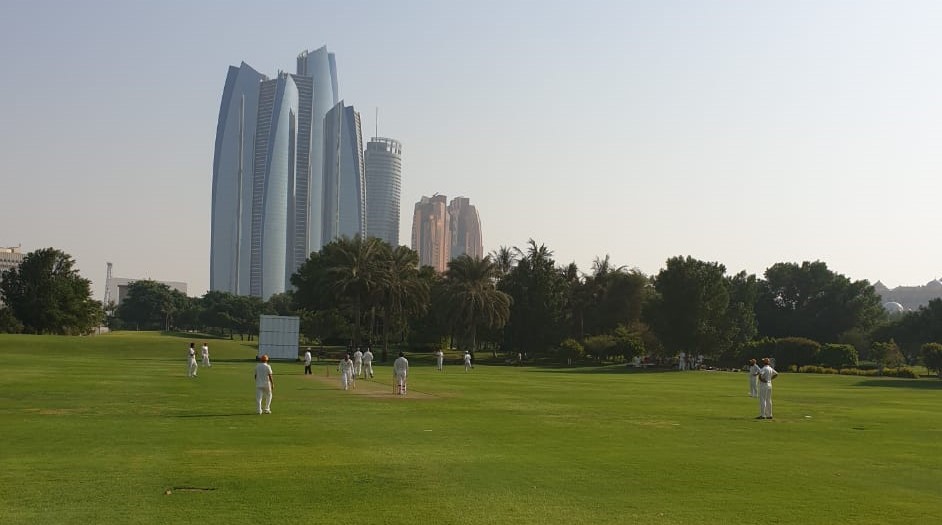 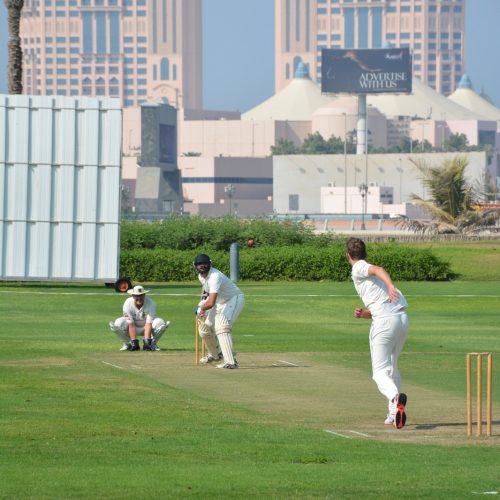 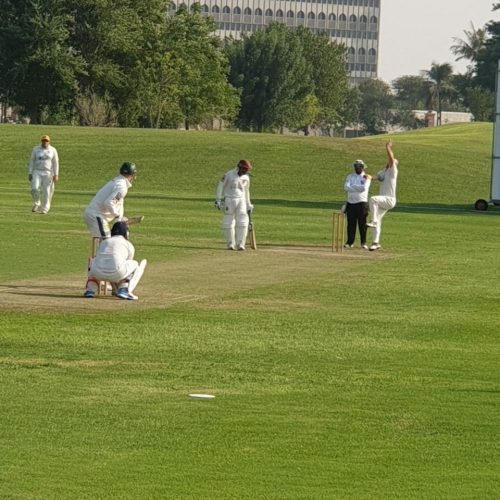 The car washes of Dhaid rarely embody the spirit of the exotic, but 7 km to the south east lies a beautifully green, quaintly rustic cricket field among plantations and gravel plains. It was an all-out, rural affair from the start with early, cunning home ground psychology at play.

Dusk enveloped the setting with flood lights being held back to ensure the Darjeeling wagon train realised it was no longer in glitzy El Dorado. Given James’s recent confessional email about a goat in the desert we feared he may never leave the area.

The captains toss, where adult men embrace their tribal responsibility and flick a piece of metal to decide who throws the ball at whom, was conducted in Dhaid’s muggy Autumn darkness by the light of a cellphone. It was our first loss of the night. The second would be Dexy, who after whistling down half an over of net-practice-like deliveries wounded himself and hobbled off the field to lie next to the boundary rope like a forlorn, beached Salmon.

The floodlights fired to life and with the neatly choreographed exit-right by the pre-game entertainment of five startled, foraging hedgehogs, it was game time. The unique opening bowling combination of Man of the Match, Will Gregori Rasputin Watson (a 4-fer on debut) and the shuffling Badger immediately baffled the opposition. George would later compliment Badger on his unexpected agility-to-weight ratio, an athleticism which may have also confused the batsmen.

As the loping left-arm mystic unleashed pacey, unplayable deliveries from within his ample beard, Badger looped in apparently terrifyingly slow turners. The batsmen capitulated to five down before long. The fielding effort was surprisingly suffocating given the Darjeeling reputation of generosity. Both Dorris and Scott held onto rippers, by our standards, and Ieuan proved a wicket keeping wall. However, there were notable efforts at big-hearted sportsmanship from an unnamed former international scrumhalf and then Ash, curiously, both using the white ball to demonstrate how a fat fledgling pigeon spills from a nest. A mixture of wides and ambitiously contrived overthrows were minor glitches supplementing the rare lusty blows that crept the opposition to 107.

Dorris, apparently still marveling at his catch and contemplating more stomach-crunches in response to witnessing the power of his batting partner’s guns, nudged an early, gentle catch back to the bowler. George continued to slap deliveries around the ground and grumbled like a poked bear at the incessant yodeling of appealing fielders.

The chorus reached its ambitious climax with a howl for LBW as a short, leg-side delivery was slapped for a boundary. George, tiring of the zoologists perpetual mistiming of strokes at the other end of the flat-rolled pitch, and pinching of strike, ran him out shortly before the composed, gentle downhill run with Laird to 107 for victory in the 12th over. George, desperately in need of protein-shakes after his flurry of wicket-to-wicket shuttle sprints avoided the post-expedition debrief at the Irish village. It would have been there he’d have heard the revelation by tribal elder and scorer, Nick, of a corrected mathematical glitch and the Hellyer maiden 50 not out.

Darjeeling traveled to Emirates Palace to meet the Abu Dhabi Gents. The scenery was jaw dropping to the vast majority of players and it took a little time to let it sink in that we were playing a game of cricket in a palace next to the beach.

David was appointed captain and had a tough job on his hands having 3 leg spinners and 3 off spinners in the team. The leggies included Joe, George and Thomas and the off spinners included Umer, Aryan and Ollie.

Toss time came around ,after relaxing under the trees, and David lost it. Darjeeling were bowling first! David gave himself the first over and kept it tidy, only giving 3 runs away. Munish was given the second over and went for 11. David bowled 3 overs with figures of 0-11 and Munish was taken off after his second over went for 29. George came on and gave a left handed batsman nightmares after bowling consistent googlies in his overs and finished on figures of 1-38 after 5.

Shehan came on and was getting some surprising bounce and pace off the wicket after telling David that he bowled medium pace. Shehan rattled the batsmen with the shorter delivery and Kai took some very good catches going low to his right. Shehan ended up with figures of 2-23 off 5. Meanwhile in the field Jaco Smith ,who was due for surgery in a couple of weeks, was throwing himself around the ground and stopping every run he could, deserving the name Jonty. Joe then came on and bowled a good spell, picking up the wicket of Sheraz who was looking dangerous on 43. Joe finished his spell of 4 overs for 2-25. Thomas then came on and bowled a tidy spell of 2-16 off 3 and had Sheraz swinging his bat so hard that David was worried that the bat would go further than the ball. Aryan was given the ball and went the distance, ending up on figures of 0-38 off 2. Umer came on for the last over and was given some punishment,going for 14. The Abu Dhabi Gents ended up on a total of 202, setting Darjeeling 203 to win.

Umer and Jaco opened up for Darjeeling. Umer looked like he was ready to rumble having hit his first ball for 4, unfortunately Umer was only able to get 20 after being bowled. Jaco didn’t trouble the scorers after playing on a delivery.

Ollie came in at 3 and never really got going and only managing 9 before being bowled. Shehan was in at 4 and looked good, hitting three 4’s and a 6, however he could only manage 25. George was next in and played a very solid front foot defence first up but he held out playing a reverse sweep and being caught. for 2. Munish was next in and managed 10, hitting a lot of singles from miss-hits before being bowled. David came in and managed 4 not out. Thomas then came in and watchfully played his first ball for a dot, then he flicked a ball of his hip down to fine leg and it was quoted ‘the shot of the day’ from the keeper, however Thomas was stumped off the bowling of Etienne, expecting it to come a lot faster than it did. Aryan came in for the last 3 balls of the match and played a nice cut shot for 2. Darjeeling finished their innings off with 80.

The Abu Dhabi Gentlemen were definitely the better team on the day.