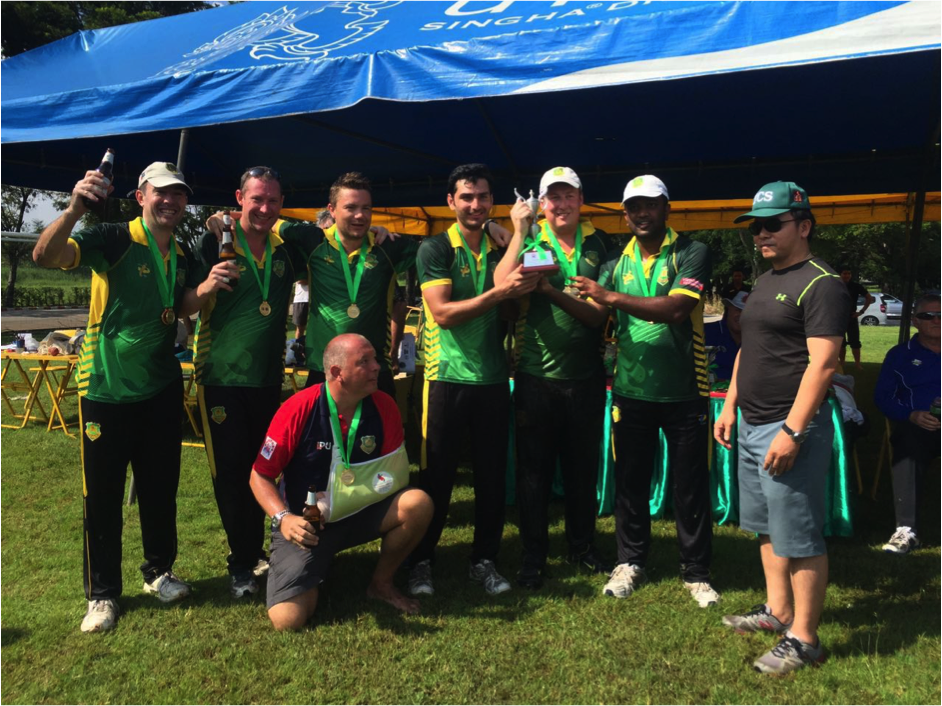 Following Nick Harvey’s passionate call to arms email before our troops headed to battle in both Bahrain and Bangkok – the stage was set for Darjeeling’s debut in Bangkok.

Sugee and Watto, arrived at the airport a good 5 hours before departure to make sure they were boozed up nicely and to talk tactics, I made the plane…just…when I was accepted 60 mins before departure. (The joys of staff travel). Ferrari owner and property mogul Nathan Williams decided to save himself AED 35 so went with Oman Air, Israr was to meet directly at the venue coming over on EY and Pete, Brandon (Nathans brother) and now honorary club member Chris Waddington (all residing in Thailand) were to meet us in the hotel / ground….

After a VERY bumpy flight…I was passed out fast asleep after drinking copious amounts at the bar, Watto,Sugee, and myself arrived into BKK…were we quickly transferred to the hotel in central Bangkok. At the hotel we were met by Nathan and his old colleague Chris – accompanied by his wife – who thankfully turned out to be one of the lads! Priority number 1, was at least 4 pints in the hotel lobby before a quick change (no time for a shower) and a bus back to near the airport to meet up with the others for our first match of the tournament.

We were met at the ground by Israr – who was no joke of a lie wearing a suit – Kezza would be joining us later in the afternoon. Game 1 we were against last year’s winners. Tight bowling by all of the team kept their score to below 60, the runs were easily knocked off by player of the tournament Watto and Israr, smashing the ball to all parts of the ground. Mandatory beverages for all were consumed between innings and matches….By game 2, Kezza joined with Nathan voluntarily sitting out to make way. Given the treacherous conditions of the ground (astro nailed into wooden planks and an outfield that resembled an Irish bog) there were some comedy classics – with Watto flying arse over a tit to the great amusement of the crowd – everyone chanting his name. tragedy however struck also, with Chris running back (keeper) to collect a ball, slipping and snapping his arm…like a real man he walked off the field, necked a beverage and got in a taxi to the hospital, still in his greens, and for some reason carrying his bat….more of this later….the match continued with Nathan replacing Chris in the field….Israr complained of a “tweak” in his shoulder after 4 wide’s and a no ball – apparently the short run up is not good for his shoulder…heard them all now….

With a score set up below 70 again, Watto, Israr, Kezza (man of the match) and Suggie chased down the runs with ease…..

That was it cricket wise for day one….the next 12 hours, became a real blur….but after the fines convention in Nathan’s room, we all headed out for a team dinner – joined miraculously by Chris – who true to his word was right back on the beverages – mixed in with some very strong painkillers….

After dinner and being the kind of cultured gentleman that we are….we went to a couple of “new age” bars, sipped exotic cocktails, watched some dance routines – similar to river dance, but with less clothes, no men, no Irish music and much nicer breasts…actually come to think of it, it was nothing like river dance….After the bars, Nathan and Kezza recommended that we visit a modern art museum….put it this way – I think we are all converted to Thai modern art….

After approx. 4 hours sleep we were back to the ground, which after the evening downpours, was more like a lake with a few small islands…but hey the game must go on…..and the beverages must keep flowing….

Playing a team from Singapore in match 3 – we were not at our best, bowling first, the oppo got about 80 odd…with normally dart accurate Sugee taking the brunt of the batsman aggression…losing 5 wickets (with me being cleaned up first ball with the second to last ball of the match with 12 needed) we fell 8 short….still with the rain gods being on our side and our superior strike rate we still had a shot to make it to the semis…

A massive storm hit in the afternoon and with a fine list the length of an elephants trunk pretty much occupied by me, a quick team negotiation was made…If I did a Klinsmann during the thunder storm in my pants – the majority of my fines would be absolved…after much deliberation the team agreed and away I went…sadly the puddle I chose was not a grass puddle but a sand puddle – meaning as a dove..the majority of my chest came off…anyway with the alcohol in me I didn’t really notice – it was only 4 days later back in DXB my wife pointed it out…by this time it looked more like nail marks on my chest – or where they?!?!?!?
After 3 straight hours of rain, the committee called the end of the days play…

After a quick shower, we were back out on the town – Soi Cowboy followed by an educational trip to PatPong….Watto was delighted with the piece of art that was presented to him by one of the girls….she had a remarkably unique way of drawing….Brandan and Kezza competed with each other to who was the better ping pong player…given his years of experience in Thailand…Pete certainly won….Sugee was more into the musical instruments….looking on astonished as they played the Sir Lankan national anthem….Israr dressed up in his best suit was more interested in his tinder (or was in grinder) frantically swiping right….it obviously paid off as when Brandon and I returned to the hotel at 3:00am – there he was in reception with 3 “legit” ladies….good lad!

Up at 8:00am the next day, we were checked out and on the way to the ground by 9. We had made the semi’s – and were on second, following one of the slowest matches ever in history played between the organisers and the geriatrics. Knowing that we had to leave latest by 2:00pm to make our 4:00pm flight back, the organiser’s kindly brought forward the cup matches…but time was most certainly not on our side…especially after match one took over 2hours.

Our semi-final went without a hitch with Kezza being the pick of the bowlers taking 3 or 4 wickets, bamboozling the oppo with his flight and spin…tight bowling for the remainder of the team, gave our inform batsman Kezza, Watto, Sugee and Israr little worries in chasing the runs down….

There was no need to worry about time as the other semi-final was over within 25minutes – the Sri-Lankan team (who we would eventually meet in the final) bowling out the oppo within 4 overs for a grand total of 8.

Having made an impact with the other teams, everyone around the side-lines were cheering for Darjeeling in the final. Unfortunately we lost the toss and were put into bat and after some solid hitting from Watto we finished slightly below bar – setting the opp 66 to win. The oppo started well, hitting both Sugee and myself for a fair few, a great middle over from Nath brought things back to par, before Kezza bowled another fantastic tight over, conceding only a couple off it. Watto bowled the last over, with the oppo needing just 15. The first ball got pumped for 6, before a “tactical” long hop sat up nicely for the oppo batsman to hit in the air for Sugee to take a great catch on the fence…Noting that the long hop worked well Watto bowled another on the penultimate ball – again the batsman aiming his shot to Sugee….With 5 needed off the last ball……..it was just too much for the Sri Lankans…..DARJEELING HAD WON…..cheers echoed around the ground – and Watto not to let down his adoring fans decided to do a fully clothed Klinsmann…unfortunately choosing the same puddle as mine – again not sliding particularly far…

At 1:45 we were presented with our trophy and the winners bucket of beverages…..at 1:59 we were changed (un-showered) and on the way to the airport. Arriving to the airport still caked in mud – we were checked in at 2:59 – 2 minutes before we would have been told to bugger off…..