Start time: 10:30 if my memory hasn’t already started getting worse

Darjeeling CC started off in the field, fresh out of a meeting discussing what was going to happen in the 2019 season and it being our 50th Anniversary. 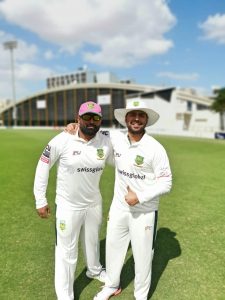 The Gents were dripping in the new 2019 season kit and it was all guns blazing in the field. The first over of the game going for a mere 3 runs off the bowling of Greg. The amazing start was short lived as Brent was next in to bowl…feeling a little worn from the night before he championed as best he could, but got sent packing to all parts of the ground going for 22 in his first and only over of the day. In what appears to be true to DCC sport, the third over provided some action. A catch was dropped off Greg’s bowling. Sadly this wasn’t the only, as a few more were to come in the days play. Greg finishing off his 4 overs for 19, which was very impressive after the dropped attempts.

The first breakthrough of the day came in the 6th over, this coming shortly after a second catch was dropped by Roscoe the over before of Greg’s bowling yet again. DCC then went on to drop a 3rd catch in the 8th over of the day… it was evident that we gave the cannons too many chances, chances which they ended up using to the fullest.

Umer was next in to bowl as the second change option. With Captain Grant opting for spin against the wind to entice the batsman to hit it long and risk their wicket. Sadly the Cannons played smart and knocked him around the ground with 12, 6 and 8 in his 3 over spell. Oh Captain my Captain Grant came in bowling at number 5. Taking a wicket in his first over, bowling cross seam as the wind had started to move across the wicket. Grant had a short spell lasting only 2 overs, but ended up with figures of 1-19…this wicket breaking an all-important partnership of 41 runs

Ash came in to bowl at number 6 in the 14th over, just after a wicket had fallen the over before… Ash started with a spread field… for the first few balls, and then the mastery and mind games took over. The field was brought in as the new batsman was very tentative and was reaching for the ball, the pressure in going over the top paid off as Ash got his man… bowled. Ash finishing off with figures of 1-49, which wasn’t helped by Roscoe as he over ran a catching opportunity in the last over of Ash’s spell.

Jonno came in bowling in the number 7 slot took a wicket in his first over. It was a well-judged catch in the deep by Brent… opting to stand his ground and wait for the ball to come to him. This was sadly where the wickets stopped, and the runs started to pile on thick and fast for the Cannons. Scoring just 77 in the last 5 overs, this was a day for the batsmen.  Cannons no3 Wake came in and dominated with the bat against the DCC bowlers. Wake played some decent cricket shots before ending his not-out-innings in true T20 style scoring 83 runs.

The Cannons posting a massive target of 194 for Darjeeling to chase down.

An honourable mention to all those of DCC who came down to watch the gents play, even though the new kit was what you were truly after… the support had not gone unnoticed.

Darjeeling batsmen needing to get off to a flying start if we were to get the W over the Cannons.

In steps our openers for the day with RK and Rohan taking to the crease. RK and Rohan looking really good and playing some positive attacking shots to get DCC of the mark with a 36 run partnership with RK scoring 20 before getting bowled.

Next in was Jerome who walked up to the crease looking confident. After a few no-balls by the Cannons bowler, Jerome fell to a brilliant catch by the keeper taking a low diving catch to his right. The shot was an uncharacteristic push to a wider pitched delivery. Jerome had fallen after only scoring 1. Rohan was the next batsman to fall for 12 . being trapped in front by the bowler. This left DCC at 47 for 3 and in real trouble needing another 147 off only 12 overs. Charles our wicket-keeper batsman walked in at number 4 but did not last very long, as he had only managed to score 2 before being caught. This leaving DCC in even deeper strife, at 51 for 4.

At the crease we now had the experienced pair of Jonno and Brent. The pair started off nice and easy by first getting used to the pace of the wicket, when all of a sudden we saw Brent start to unleash. Brent having to make up for his bowling decided to take the bowling attack on, with massive success. Ending on an unbeaten 89, which included 7 x 6’s and 7 x 4’s, with the odd single here and there to keep him honest. This was an innings unlike any other seen from the supporters of DCC. A whirlwind performance with the bat, smearing the bowlers to all corners of the ground with some amazing power and stroke play from the man hailing from South Africa.

Jonno standing in amazement at the non-strikers end watching as Brent is owning this moment and owning the bowler. He had them in his back pocket. Jonno playing the supporting role of the day and himself scoring a well-paced 50 which included 7 x 4’s before being caught. Jonno at time looked to turn the screws with his running between the wickets as he wanted to get Brent on strike more often than not. Brent almost running himself out, and at the end fell to the ground trying to catch his breath, but Rasta rose to his feet and championed on.

Brent and Jonno turned the almost unthinkable into reality with a stand of about 130 runs. A well-paced and well composed innings from both men to steer Darjeeling into the home straight to winning the game. Jonno almost ending the innings with a not out next to his name. Unfortunately he fell agonizingly short with the end of the game in sight. In stepped Greg to add a single run, before Brent scored the winning runs in good fashion with a 4.

This had been a hard fought win by the men of Darjeeling CC. An epic run chase to say the least, and getting the first win under the belt with new swissglobal kit made it even more special. This has to go down as one of the greatest knocks by Brent. 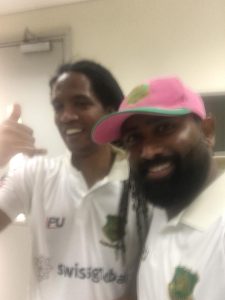 The DCC gents thanked the Cannons before making their way into the cloak room where Grant handed a very well deserved man of the match performance to Brent by handing over the match ball. The celebration that followed was one that was well deserved