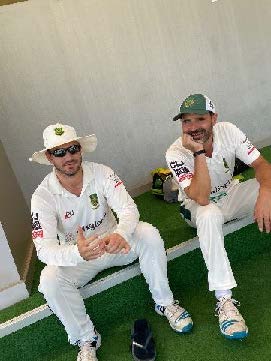 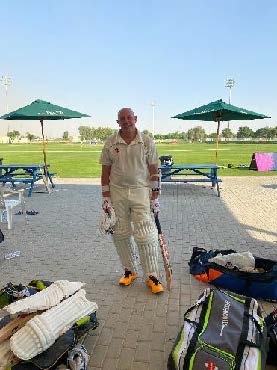 Clearing skies with a hint of cloud, temperature increasing to an unseasonable 27°C

Social cricket is most fun when there’s a reasonably competitive game, everyone gets to contribute, and the match is played in good spirit. And so it turned out to be against one of India’s oldest cricket clubs https://en.wikipedia.org/wiki/Parsi_Gymkhana,_Marine_Drive

In typical gentlemanly fashion Watto negotiated the toss and offered the visitors first dibs with the bat. Khushal and Neville came to the crease, to negotiate the bowling of Brent and Oli Page doing their best on a slow, slightly two-paced track with a bit of clay in it.

Brent and Oli kept it reasonably tight, and at 15 in the 4th over Neville was castled by Oli without having bothered the scorers over a 9-ball stay. On the other hand Khushal, after getting the measure of the track and the outfield, set out to play one of the more cultured innings we’ve seen from an opposition batsman in a long while… not just social oppo, but also in sharp contrast to the modern dashers, agricultural smashers and hopeful slashers of the DSL. After 6 overs Watto rung the changes, Brent 3-0-24-0 and Oli 3-1-10-1

The skipper Manek kept him good company, nurdling it in the arc between third man and point for the most part, and the two put on 85 for the second wicket off 12 overs and a bit, despite Nick bowling very well from the Port End and unlucky with a few near misses (3-0-20-0), and yours truly doing his bit from the School End (5-0-30-0) with a bit of cat-and-mouse against Khushal.

At the 2nd drinks break after 16 overs, Khushal retired for 66 off 59 (9×4 and 1×6), having played orthodox shots with good shape, on an outfield which seemed to have quickened considerably since our last match on this pitch.

We were a bit thin on spin and Arsalan replaced Nick (who had to come off after a stunning Darjeeling FC style trap of a very hard hit straight drive as he followed through), for a couple of overs of (allegedly) off spin, 2-0-12-0, before the quicks came back on, Olly vdB with some seam-up, and Ben who struck immediately, castling a really good-looking left-handed batsman who had swivel-pulled his first delivery for a flat 4 through square leg, and then again in his second and third overs, ending up with 3-0-12-3 as the lower middle order perished rapidly whilst trying to get to a competitive total.

Charles and Arsalan opened the batting for us, and they galloped along to 57 when Charles was out for a well-made 33 (29b, 5×4) in the 7th over and Tebby came in, only to depart in the 8th. Meanwhile Arsalan played a few gorgeous shots, and both our openers had made evident to the oppo that we could bat, too.

Ben Jones was deservedly MoM for his all-round heroics, and after a good speech by the visitors’ travelling luminary, duly anointed by the opposition skipper…