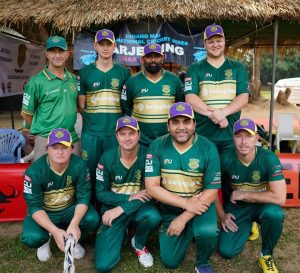 The reassuringly mountainous presence of Blikkies opened with Graeme self-proclaimed “Worth My Weight In Gold”.
In testing, hazey & smoggy conditions on a new lump of plastic, the start was cautious.
#WMWIG monopolized the strike stroking a brace of fours through the unguarded covers.
The erstwhile Beijing Duck was removed for 17 in the third over. The former Armadillo was reprieved on 5 before launching consecutive sixes. On the final ball of the penultimate over, Blikkies holed out while PSG and Rachitt negotiated the final over setting a total of 48.

The Dubai outfit had the perfect start as the Rudi removed the opener with his first ball of an economical over, that yielded a mere seven runs. The Bangladeshis stabilized their innings before a final brutal assault. Ratchitʼs last ball was dispatched for 6 having conceded only two runs from his previous deliveries.
With brutal efficiency the remaining runs were garnered off the suffering skipper, who dropped a sky-high catch running towards short cover.

The holders had won their first game with 7 balls to spare and earned a bonus point but the Darjeeling team had not disgraced themselves against the most challenging opposition. The NCL Dynamites skipper’s post game review comments were, ‘…. hopefully we meet DCC again in the Cup final stages’, acknowledging the talent of DCC (Blikkies, Graeme W, Rudi, Rachitt, Ian P, Peter L, Ettiene, Chris M & Umer).

After a few games of near misses and what could of been, Darjeeling were knocked out in Round 2, losing by a small margin to Yorkshire Puddings & by Thai Nevada.
Darjeeling bowed out of the competition, clapping the support staff, admin and tournament organisers whilst walking off the field, thanked by the commentators in
https://chiangmaisixes.cricket/match-centre/2019/round2 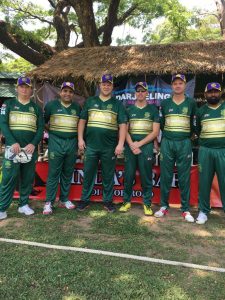